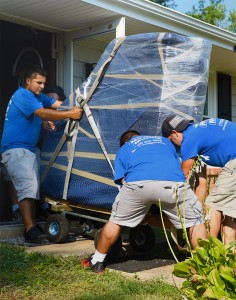 Sterling residents, Leah and Vinnie Habron, generously donated a baby grand piano to Riverside High School, the newest school to open in Loudoun County. Piano movers, My Guys Moving & Storage, moved the piano at no charge to help facilitate the worthy cause.

Leah and her sister, Laura, learned to play music on the piano as children. Leah went on to play clarinet and piano at Robinson Secondary School in Fairfax, VA, where she participated in Symphonic band, jazz and marching band.

After many years of melodious use in their home, the piano started collecting dust. The Habrons needed room for their growing family and wanted to use the space as a play area for their two toddlers. The reason they chose to move the piano to Riverside was because there was a music program, and though Loudoun County provides pianos, the school was so new that it did not have one yet. Leah wanted the piano to be loved and put to use the same way she and her sister had played it growing up. 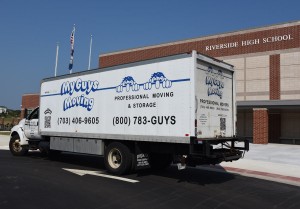 Bram Smith, the Director of Bands at Riverside High School, said “This is an incredible donation that we were not expecting.” This is Smith’s seventh year with Loudoun County Public Schools, having spent the two most recent years at Broad Run.

After piano movers, Alex, Isaias, Michael, and Edwin, had finished setting up the baby grand piano in its new location in the music department, Smith said that the piano would be especially useful in the jazz class. The Habrons were sorry to see it go, and said “Someday we will own a piano again, but most likely an upright.” 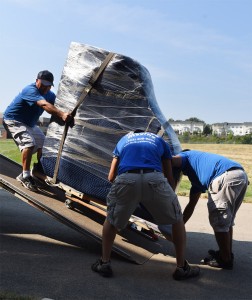 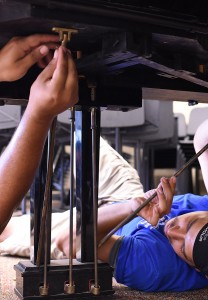